How Tech is Advancing the Future of Mobility

Technology is modernizing and improving the way we travel.  New technologies are making transportation more accessible, significantly reducing our carbon footprint, and lowering the number of injuries and fatalities on our roadways.  In this week’s Tech At Work, learn how tech is advancing the future of mobility.

Motional has partnered with Via to launch a new robotaxi service in Las Vegas.  The service will provide free self-driving rides to passengers in the city.  Motional’s robotaxis will connect riders in downtown Las Vegas to business hubs, residential buildings, green spaces, government buildings, public transit stations, and more.

Cruise is expanding its self-driving delivery pilot program with Walmart in Arizona.  Currently, Cruise is working with one Walmart store in the state to deliver items to customers autonomously, with a human safety operator behind the wheel.  Cruise plans to expand to as many as eight Walmart stores in the state this year.  Last month, Cruise also opened up its driverless robotaxi service to the public in San Francisco.

General Motors is collaborating with Pacific Gas and Electric Company to pilot the use of GM electric vehicles as on-demand power sources for homes in PG&E’s service area.  The companies will test vehicles that can help safely power the essential needs of a properly equipped home.  The pilot program will enable power to flow from a charged EV into a customer’s home, automatically coordinating between the EV, home, and PG&E’s electric supply.

Visa has launched the Visa Creator Program to help digital-first artists, musicians, fashion designers, and filmmakers accelerate their small business through non-fungible tokens (NFTs).  The program will help creators and entrepreneurs looking to incorporate NFTs into their business by deepening their understanding of the technology and platforms underpinning NFT commerce.

Before You Start Your Weekend

Robotics, in the air and on the ground, will usher in Industry 4.0.  That’s why Verizon announced a new partnership that will help more industries move from concept to solution in the field of robotics.  See how robotics can lead to a new era of innovation. 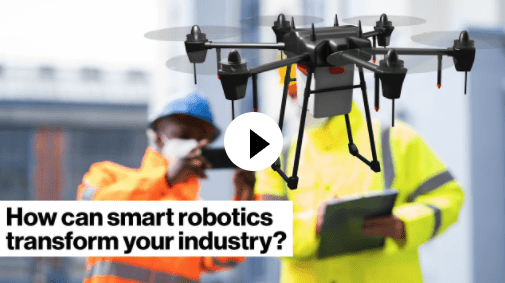